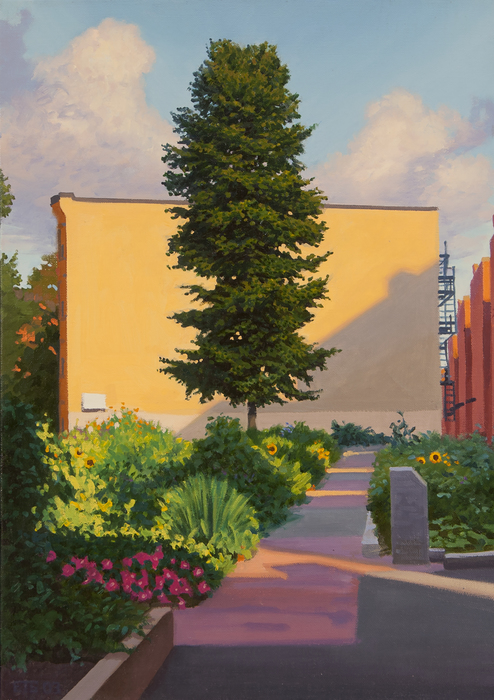 This painting shows an odd, tall tree at the end of a local public garden plot. It is another “distant destination” painting.

When one sees such an odd example of plant life in the middle of a city, one wonders about the history that made it. I'm guessing there had been a building just beyond that tree, and that this tree had been allowed to grow in between it and the buildings that had been where the gardens now are. It had an odd outer "shell", or canopy... Usually these trees grow fuller, wider. This one was unusually tall and narrow. So once again, for this tree to get light, it would have had to grow tall and straight, with little light other than what was above it for sunlight. When the buildings came down around it, it had already grown quite tall, with short outward branches below. Those will begin filling out now that the buildings are gone.

So there IS a bigger story in this odd shaped tree. During the 1970's there was a string of arsons on Symphony Road, where this garden is. According to the documentary, Burning Greed, arson was the way developers got poor people out of the neighborhood. A 4 year old boy died during one of the worst arson fires. These buildings were where the gardens now are. People from the community insisted, and eventually won, this plot to become gardens, not more buildings for higher rent.