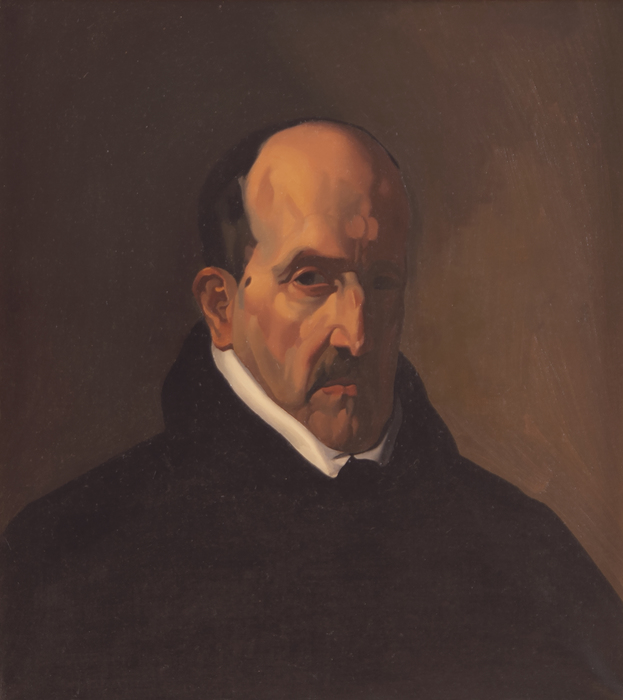 We wanted to stay in Boston, but medical training doesn’t always give you what you want. For her residency, Zoe matched with the University of Rochester’s Strong Memorial Hospital and its excellent program headed by a genius in the field of dermatology, Dr. Lowell Goldsmith. Since we were sadly going to leave Boston, I wanted to bring my favorite painting from the Museum of Fine Arts with me.

Why this painting, you might ask. Paul Ingbretson laughed when I told him this one; he said there were so many better painted heads by Velázquez over there, this was so tight and austere. Maybe that’s why I liked it. I learned that Velázquez had been a gifted student, and had gone to Madrid to try to get into the good graces of the young King Phillip, who was roughly the same age as Velázquez. Velázquez was a commoner, not of the noble class, so the best he could manage was to get the poet, Luis de Gongora, to sit for him. He did three portraits of him, probably in a short amount of time, some with laurel wreaths around the head (a symbol of intelligence and poetry). It just so happened that de Gongora was invited to a dinner with the king and was able to mention the fine portraits that Velázquez was doing. Phillip asked to see them. When de Gongora had them brought in, Phillip asked if Velázquez might be willing to do one of him. Of course, he was, and did, and they hit it off and became friends, and Velázquez had a job for the rest of his life. And thank God he did! If anyone should have been allowed to paint, and use paint to express his times, it was the Prince of painters, Diego Velázquez!

I had to ask permission from the Museum of Fine Arts to paint it. I had to have it a certain size different than the original. It had to be stamped on the back. I couldn’t bring open solvents into the galleries, and had to cover the floor below me as I painted. But I did all that and painted it. Mine kept looking too wild, too colorful. George Nick told me I wasn’t mixing enough. But it turns out I had too many colors on my palette. I eventually learned that Velázquez probably used a very “lean palette” as Antonio Lopez Garcia put it – the translator used the term “skinny”, but spare, or lean is what a painter would say in the U.S. The idea is to use as few colors as possible to get the desired effect, thus creating a natural color harmony. Velázquez was probably trained using white, black, and probably something similar to our yellow ochre and Venetian red. When I switched to a limited palette I could spend less time mixing and more time drawing. It came out so well that I brought it down to Gallery NAGA to show it off. I didn’t want to sell it. I wanted to keep it. But to my delight Ernst saw it and wanted it. I'm glad he did, because it was up when Antonio Lopez Garcia was invited to Boston and came to a reception. After the reception I saw him head over to my painting and put his glasses on to look at it. Here was a chance to talk with a great one, I thought. Through a translator, he said he knew it was a Velázquez copy right away and said he appreciated the unique shapes I used to model the form… He asked how long it took? 5 months. What colors did I use? Etc. After our translated conversation, he nodded and smiled and shook my hand.