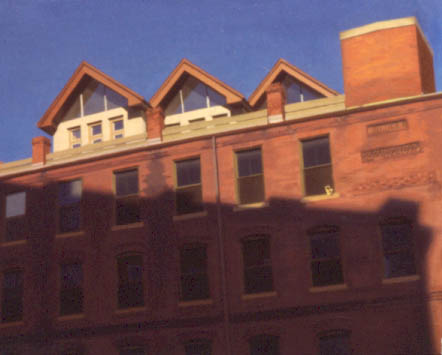 Advance of the Condos

21. Advance of the Condos 1988 oil on linen 34x42” Collection of Richard and Judith Wurtman

Development began to appear overhead in the warehouses around our artist lofts.

Upon graduation from the Massachusetts College of Art in 1987 I returned to my studio at 63 Melcher Street in Fort Point Channel. The area had been changing when we began the studio there, and it continued to change as condominiums and businesses moved in. FPAC (Fort Point Artist’s Community) artists had pointed out to me that often this happens; artists move into an area to create art because the rent in that area is cheap. As they work on making art, the area becomes known as an interesting, desirable place to be because of the art activity going on. Then, real estate developers begin to eye the buildings and develop them so they are more desirable for people who want to work or live in the artist area. After a while, the rent of the cheaper loft spaces start to go up and the artists who are barely making it have to move out to go to cheaper places. Our rent was slowly rising each year, too. But we could continue to make art as long as it was reasonable…