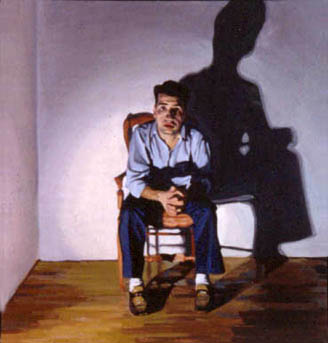 During winter months I couldn’t paint outside so I decided to do portraits of friends who were willing to sit for me.

Fort Point Channel was an area full of old wool warehouses that the Boston Wharf Company owned and that artists were moving into because of the cheap rent. Artists were not allowed to live there, but were allowed to work there. Peter Barnes, an artist and organizer, interviewed and galvanized a group of artists, of whom I eventually became one, to sand the floors and paint the walls of the first floor of 63 Melcher Street, right across from the Hav-A-Bite Restaurant. This was my own little place to paint. This was where I could have my models and still lives sit to be painted.

A friend from church, Eddie, always had this unsure face – which reminded me of myself... how I often feel. I guess I wanted to paint him to say something about myself. I asked him to sit for me, and I would do a portrait of him, for him, in return for his time. He agreed, and we set to work. The lighting wasn’t planned… I just tried various angles and this one, with the light on the floor in front of him, seemed to accentuate the feeling I was after for the portrait. We did this over the winter months; once a week I’d pick him up, we’d take the subway to my studio and spend the late afternoon together… sometimes having dinner over at the Golden Gate restaurant in Chinatown.

I showed this painting at Boston City Hall in a show this same year. It didn’t sell, so it ended up at my studio for the next 31 years until someone bought it. But someone did see it there. That someone was Arthur Dion, who represented me at Gallery NAGA from 1984 to 2011, when Meg White, his cohort since 1999, took over the gallery’s operations, including my work. Here’s what he wrote when he saw an image of this painting recently;
I'm delighted to learn you're still in touch with Eddie.


Here's the way I remember our first meeting.  You walked into the gallery and introduced yourself, planning to present images and to seek response to your work.  I said, "You're Ed Stitt?  Didn't you paint that picture of a guy sitting in a shadowy corner I saw at City Hall?  It was the only interesting painting in the show."
You were floored.  I recognized your name.  I had already seen your work in person.  I remembered it.  I liked it.  I was happy to meet you. Strategy was unnecessary.  In a few seconds we had skipped way ahead to "Yes, let's see what we want to do together here."
For thirty-three years I've delighted in your ability to make alluring objects out of paint and I've connected with the tender and glorious values your work espouses. This painting leveraged all of that.