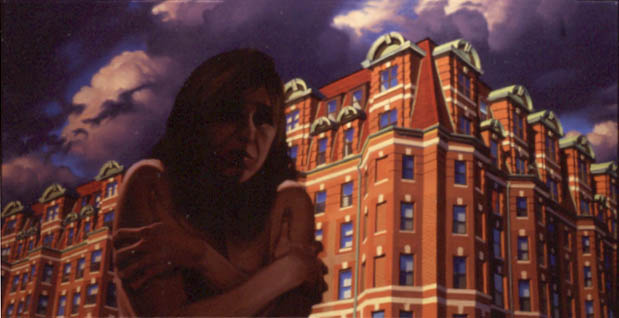 Hemenway Street Scene    1990    oil on linen    24x46”    collection of the artist
This unusual painting was to show the plight of women who were caught in the drug and sex trade on my street.
There was a nearby street corner where we saw prostitutes talking with johns who would prowl by in their cars. I recall there would be three or four women hanging out near a pizza shop, chewing gum and just waiting there, with nowhere to go. Now and then a car would drive up and one of the women would walk up to it and talk with the driver. Sometimes they’d toss their gum onto the ground and get into the passenger side.  There was gum all over the sidewalk.  When the police would drive by the women would go into the pizza shop.  One day Zoe came home from work and told me she had seen one of her former high school classmates on that corner. This classmate had trouble with drugs in high school, and here she was, seven or eight years later, on the street, paying for her habit. This was terribly sad for both of us. It was also gripping because recently the news had reported that a number of women, found dead on Route 24 outside of Fall River, had been connected to Fall River’s red light district.  So this life was no longer just about recreational drugs, it was now about sex traffic and possible death.
We suspected that some of the activity was going on in the building on the corner; the Hemenway Hotel.  I chose to do a painting depicting the feeling of all this, with a nude figure made up of a composite of Zoe’s body, my hands, and the head of a woman whose face I took out of a newspaper article about the Fall River red light area.   I used the beautiful architecture of the hotel as a backdrop, with a dramatic October sky, and made the size of the canvas roughly the size of a driver side window, with the woman approaching.  This was the scene on Hemenway Street.
A couple years later the pizza shop was burnt down. Apparently, the owner would kick the women out when they’d all come in because they weren’t buying pizza, just escaping police. So the word was that the pizza place was burnt down in retaliation for not cooperating with the pimps’ business.